When I decided to add this to my library of blogs I thought I should finally find out why sausages in Yorkshire pudding mix is called ‘Toad in the Hole’.  You’d think as I once lived in the good city of Wensleydale I’d know already, but I don’t.  Allegedly it’s because the sausages peeping out of the Yorkshire pudding resemble toad’s legs popping out of a hole… well yes of course.  Needless to say it’s raised some Kiwi eyebrows over here when I’ve mentioned I’m cooking it.  They can’t judge, they have yo-yos and cheerios.

So this is a good hearty meal and it includes sausages, and what child does not like a sausage or three?  You are meant to make it with onion gravy, which I would if I was cooking it for adults but I think that extra effort would be lost on my children so I let them have tomato ketchup.  I would like to stress at this point, that on average we have one meal a week that has ketchup with it, it’s just I seem to have included all of them in my blogs so far.

I base my recipe for Toad in the Hole from Jamie Oliver’s ‘Happy Days with the Naked Chef’ book but I’ve used one from a Good Food magazine also.

Bang your oven really hot – I pitch it at 220C but mine gets ridiculously hot so you might want to put yours as hot as it goes.  Put about 1cm of sunflower oil in a baking tin or dish (I use a square roasting dish as it’s easier to wash up after).  Put the dish in the oven for 10 minutes.  Take it out and add the sausages.  Keep them in for 20 minutes and turn halfway through.  When that’s happening put your milk, eggs, salt and flour in a bowl and whisk until fully mixed.  Once the sausages are golden get them out and pour the batter over, try to make sure it’s evenly spread over the dish.  Put it back in the oven and don’t open the door for 20 minutes – this is the important thing, you can’t open the oven or the Yorkshire pudding will collapse and no one wants a saggy pud! After that 20 minutes pull it out and it should look something like this. 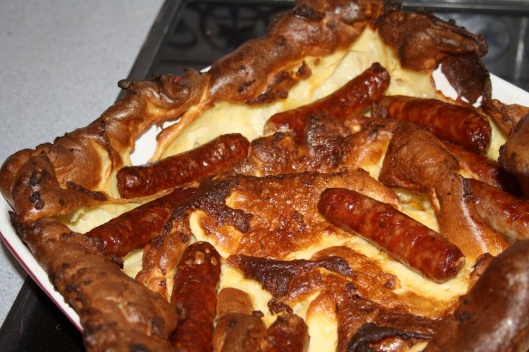 My brother would get that pudding higher!

I serve this with green vegetables steamed but you could have baked beans as a more Friday night, not as healthy, but super tasty option.