This category of blog is the one I am hoping for the most interaction and feedback, a Movie Club if you will.  Please wade in with your thoughts, if you have seen the same film.

I like to watch films.  I’m no buff, I don’t want to set my stall up as being someone who is qualified to be a critic but I enjoy “the movies”, so this is my space to share what I think of a film.

Last night I went to see Age of Adaline.  I really enjoyed it.

The story goes that Adaline, played by Blake Lively, was born in San Francisco at the beginning of the 20th century.  She marries and has a daughter.  Her husband dies in an accident connected with the building of the Golden Gate Bridge.  Soon after, in 1935, she is driving at night during an unusual snow storm, crashes off the road, her body freezes, gets struck by lightning and for some crazy made up scientific reason her body stops ageing.

The film is set in present day, when Adaline is 106 years old but still living in the body of a 26 year old.  From the age of about 40 she has lived life on the run and effectively alone so that people won’t become aware of her unique physical state and make her their lab rat.  Where we catch up with her, she is working in the archives section of the San Francisco Public Library and she meets Ellis Jones who falls in love with her at first sight.

They have a really romantic first few encounters.  She struggles to let her guard down but her now 80 year old daughter encourages her to live life, and so she allows herself to get more involved with Ellis and goes home with him to celebrate his parents 40th wedding anniversary.  Ellis’ dad, played by Harrison Ford, knows her from his younger years and so things get complicated….

I have a real love for nostalgia, I love history and I personally would like to be 26 for the rest of my life so thoroughly enjoyed the concept of the film.  Adaline has very good taste in clothes so essentially we get to see the very classically pretty Blake Lively wear awesome outfits from every decade of the 20th century – man she must have loved this job! 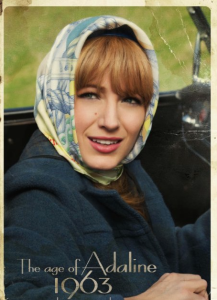 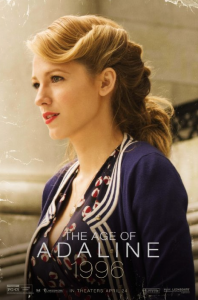 Obviously the concept is ridiculous, but hey we over look that for Star Wars, The Matrix, Hunger Games etc so why not for a love story?  And as love stories go I thought this was sufficiently captivating.  The film follows the usual formula, girl meets boy and they fall in love, there are obstacles to them being together and the film is about whether they can overcome these obstacles or not, and if there is a happy ever after?  I’m not going to tell you what happens but let’s just say, if you like to feel warm and at peace with the world after a film, you’ll most likely enjoy this one.

Of course the heroes of the film aren’t unpleasant to watch either.  Michiel Huisman is new to me, he plays Daario Naharis in Game of Thrones, which I haven’t watched and doubt I ever will.  No idea if he’s a nice guy in GOT, but he’s just yummy in this.  What I like about this film, where the protagonist is a woman, is that the men aren’t portrayed as silly, useless or needy.  In fact they are honourable, kind and know their own mind – you know, men you can respect and deem worthy of the female characters.

It’s at times very weird to watch as Adaline is a 26 year old woman living in 2015, but is also 106 years old and has lived through the whole of the 20th century.  Her style in clothes and in her home reflect that she has stayed somewhere in the 1950’s and 60’s and the way she relates to people is with a calmness (maybe aloofness) that I assume is meant to portray the wisdom and experience of her soul’s years.  You just want her to loosen up a little and enjoy life!  Maybe after 80 years of being 26 I would be tired of that age but I think I would have liked to see the character revel in the benefits of being immune to ageing.  There was very little comedy in this film.

Ultimately I liked it and may even purchase it on iTunes to watch again as it is a very pleasant to watch love story, the sort I watch when I’m having a cosy night in on my own.  I don’t think Gareth would care for it much, I would say it’s definitely one for the girls.