We hit our NZ three year anniversary at the end of March and whilst the day passed with little recognition, it was in fact a significant milestone.  When we first had the crazy idea of moving our wee family over to the other side of the world to be part of Christchurch’s rebuild we said the adventure would be for three years. We’re still here.

Because how long does it take for a city to recover?  The Oxford English Dictionary states that to recover means, “to return to a normal state of health, mind or strength.”  When you travel to other cities, you realise what is currently “the norm” for Christchurch is far away from normal anywhere else. 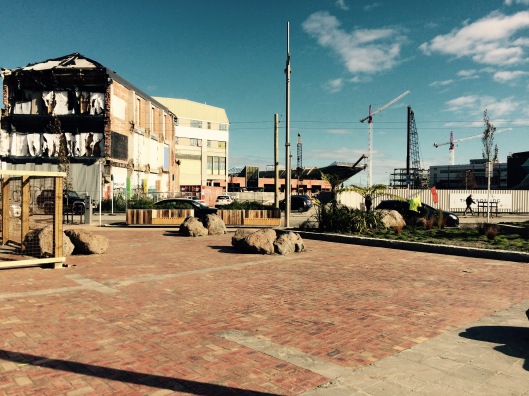 This is a typical view of Christchurch city centre, to the left a building half demolished, in the middle the new bus exchange being built and cranes EVERYWHERE!

Gareth came here to work as part of SCIRT (Stronger Christchurch Infrastructure Rebuild Team) which is essentially the horizontal and underground rebuild that makes the vertical, buildings going up rebuild possible.  SCIRT has recently passed its halfway point, see https://www.youtube.com/watch?v=yrg8SnvSn0M and look out for Gareth, but that’s not even halfway to the city being rebuilt.  I think the general consensus is it will be 20 years for Christchurch to be a fully functioning city again.

As I get to know Christchurch, and even though I didn’t experience the earthquakes, I feel like I know how she feels.

Truth is, although Gareth and I were motivated to come to Christchurch to do some good and help out, we came for our own recovery too.

Our “earthquake” happened in 2007 when we were told at the beginning of the year that we couldn’t conceive naturally.   That’s when we were shaken to our core and everything came tumbling down around us.  Our hopes, our assumptions, our plans, our dreams, our understanding of how life works, our confidence in our own strengths.

The thing with an earthquake is it effects each place in a different and unpredictable way.  It is unique and complex and therefore very difficult to understand.  It comes out of the blue so you can’t protect yourself fully from it, things will break.  And even though there are experts to help and people who care all around, they can’t stop the earthquake, they can only help with the aftermath.

The earthquakes in Christchurch did different things to different places, some buildings came down, some suffered major cracks in the walls, some inexplicably seemed to barely change. Whole sections of the city had liquefaction, a drive from one side of the city to another can feel like a roller coaster. So dealing with the aftermath looks different for each place, some you have to go right back to the foundation to deal with the problems, other places just need cracks to be filled in.

We’re the same, our earthquake was unique to us and just like Christchurch’s earthquakes, there were aftershocks for a long time later.  An earthquake has an epicentre but you’re a fool if you think it’s only going to hurt in that one place, an earthquake reaches all around.  For me, finding out we couldn’t have babies naturally, didn’t just hurt in one place in one isolated moment.  Just when you think the shakes have stopped and enough time has passed, it shakes you again.

Just like Christchurch, when the initial quake hit we collapsed and aid came in immediately to help.

First thing you need is care, comfort, provision.  You’re in a state of emergency.  For Christchurch that was communities helping each other out, giving each other shelter, food, rescuing people from danger, digging out liquefaction from their neighbours gardens so they could get into their houses, rescue services and the army and just regular people all came to guide and protect people.  For me it was hugs, wiping away of tears, sharing our disappointment and our hurt, bringing round chocolate brownies, being there.

Then you need the experts, the people who can come and tell you what to do next.  For Christchurch that was engineers, geologists, contractors, scientists and so many others who worked with the local and national government to make a plan for recovery.  For us it was the IVF Consultant at Liverpool Women’s Hospital, who explained how IVF could help us make embryos, friends who could help us understood how this all fitted in with our faith in the God of miracles and the Giver of life, people who had experience with infertility – these people gave us hope and a plan for recovery.

Then the work begins and you get focussed on the end result, a solution to the problem.  For Christchurch, repairing the infrastructure so the city can be rebuilt.  For me, going through IVF and praying and believing for a family.

The aftershocks came along the way;  realising the miracle wasn’t going to look how we wanted it to, words and actions of others close to you causing pain, you and your spouse hurting in ways that the other doesn’t understand, a failed first round, the humiliation of the procedures.

When I think about the people of Christchurch, I think it was an extremely vulnerable time for them.  To be so exposed; news channels literally beaming images to the rest of the  world of your ripped up home or bloodied bodies being brought out of collapsed buildings.  Needing to ask for help.  Christchurch was so blessed by the rest of NZ and all around the world, sending aid, sending money, sending encouragement.  Even now, four years on, the city has so many organisations still helping, and visitors sympathising with the devastation the earthquakes left.

I found that part hard.  This would normally be an intimate and private thing between a couple.  Something a couple could choose to only share when they want to, usually with their 12 week scan picture.  It’s not like that when you do IVF, people knew where we were up to all the way; how the drugs were effecting me, when the embryos would be put in, when we should know if it’s worked.  You’d have to lock yourself away and be mute with your friends and family to keep this stuff secret because it takes so long and involves other people, it’s not just a quiet night in or a weekend away.  Nurses, consultants and lab technicians are with you every step of the way.  I wasn’t conscious when my eggs were taken out and Gareth dropped off his swimmers on the way to work. My babies were put into my womb whilst I lay on a raised bed with a doctor in between my legs holding a giant needle, a lab technician standing by and Gareth fully clothed, sat in a chair in the corner – I cried every time.

I am so grateful that we got what we hoped for, a daughter and then a son.  Our earthquake passed, but recovery continues.  You travel a road to recovery and there’s no telling how long it will take.  I guess it depends how far down it shook your foundations.

Street art often has the theme of rebuild in Christchurch.

Christchurch is doing really well.  When we moved over here, we saw the resilience.  We were moved and convicted by people’s ‘we can get through this’ attitude and I think it’s something that they can be so proud of, how they faced their earthquake and didn’t let it defeat them.  But recovery is hard.  It doesn’t happen as fast as you want it to and it’s not easy.  Christchurch’s earthquakes took away the city centre, wiped out entire communities and residential areas, permanently shut down schools, threw average people into four year (so far) arguments with insurance companies over repairs on their homes, and left children with PTS that causes them to duck for cover when a lorry goes past the window.  Whilst the new buildings are being built, there are still some buildings being demolished.  It’s messy and mistakes are made and the best intensions don’t always produce the right results so people keep getting hurt and let down.  But the danger has gone and the city is standing tall.

We’re doing really well also.  We have recovered so much by being a family and being here.  But I know I’m still a little messy.  When people I know get pregnant, there is a little jolt of disappointment that hits me.  I have a recurring question in my mind, would I want more children if it were possible?  Why did we have to go through this?  I think our infrastructure has been repaired and we have become stronger, we’ve learnt lessons, we know where we are weak and when the next earthquake comes it hopefully won’t do so much damage.  It’s taken so much more time to get to this place of healing and I’m surprised by how much is still to be done but rushing the process or fighting what needs to be done to recover doesn’t help anyone.  And of course there will be scars forever.

Just like Christchurch, in our lives there is always a possibility of another earthquake.  There’s no way of stopping it, or even predicting it and we can’t know for sure where it will come from, what it will look like and where it will hurt the most.  But by recovering well from the last one, we are stronger and we have more character than we ever had before the earthquake.  Never underestimate the importance of recovery.