Social media among many things is a way of individuals marketing themselves to their target audience in such a way that gives those that see their posts, tweets, blogs and Instagrams an impression of their lives that is the only one they want people to see, but is in fact not an accurate representation of what their life is really like.

Of course that’s as it should be.  That’s why we have families and homes and private lives and our own thought life, so we can choose what we share with others.  We often hear about how social media is taking away our privacy and exposing too much, but I think for the majority of us we still keep hidden what we don’t want others to know.  The whole thing about marketing is that it sells a product people want, that people will be attracted to, that people will want in their lives.  So if Facebook is the marketing campaign for us ‘The Product’ then we’re going to put our best up there.

I’ve never looked over my Facebook marketing, but I would wager that the over riding message my campaign is giving is I love my children, we’re having lots of fun, every day is cupcake day in the Cowles home and I like really cool things.  And that’s really the message most of us are sending out there isn’t it, I’m great, please be my friend.

What got me thinking about this today is that I read a blog of a friend of a friend who is a young mum (isn’t that like 90% of bloggers??) where she talked about “the mythical creature that is Super Mum” and essentially she talked about not comparing herself to this superhuman standard of a mother that we all feel we should be, who bakes without sugar, makes all her children’s clothing, spends seven hours a day playing one on one with her brood and runs a successful design agency in her spare time – you know, her.

Here’s a photo I took today.

It’s my super cute two year old, sitting in a toy box having lots of fun.  The sun is shining outside, the carpet looks clean and obviously his mum is sat on the floor, taking pictures of him and having a giggle with him.  My perfect life.

I could have written a blog about how much I love my boy, how he is my delight, how it’s challenging being a mum but there’s so many pockets of joy that it’s all worth it.  I may have alluded to the fact that summer is coming and we’re having great fun in the garden and going to the beach.  I may have even said that despite the impending house renovation, the bills that come with it and the mess that is gradually building up as I care less and less about the tidiness of rooms because they’re getting smashed in anyways – I still feel so blessed with all the room we have, how we get so much sun in the rooms and the vegetable garden is producing courgettes.  All of this would be true and I would have been uplifted by focussing on the positive and my family and friends who read it would be pleased to hear we’re all doing so well.

However what is also true is that before I had even gotten out of bed today this adorable boy stuck his bare bum in my face, whilst his finger was in it and said ‘Mummy wipe’.  Just moments after mopping the kitchen floor I spilt my morning coffee all over it along with the pyjamas I had just put on clean last night.  When out doing errands my son had three, face-on-floor tantrums whilst judgy shop assistants stared at me as if I’d shown them my bare bum.  My ridiculously hot oven burnt a tray of cupcakes in five minutes so I had to throw most in the bin, and cut the tops off the rest so I could ice and take to my church life group (thus enforcing the illusion I am a great baker and we always eat cupcakes).  My children flooded the bathroom floor despite me threatening them with countless punishments so eventually I nearly drowned them with my furious and vigorous hair washing whilst screaming (I think my whole street will have heard) at them for being SO NAUGHTY!  The TV has probably been on for about 3 hours today, I didn’t sit with them whilst they painted, I fed them chocolate digestives when out on our shopping trip, I forgot to clean their teeth this morning, I took a photo of them when they climbed on the roof of the car instead of telling them off because it was so dangerous (I did tell them off after I got a good photo) and frankly, by 4pm today I was just counting the hours until they were in bed and I didn’t have them screaming, demanding or misbehaving around me!

I don’t have any photos that show all that mess, but today I was thinking that’s what I should do, take a picture of all the messes and misdemeanours and post that on Facebook.  To give an honest reflection of my day so people wouldn’t get the impression that I am all sorted and the perfect mother but that I’m just like everyone else, imperfect and missing the mark a lot of the time…and sometimes I’m really upset and angry about that, it’s not always cute and funny when my children are naughty, sometimes it’s just really annoying and downright dangerous.

So here’s another photo from my day; my son on the roof of the car, which he climbed onto whilst I was pulling burnt cupcakes out of the oven and cursing the kitchen I have.  It’s still too smiley and not at all reflective of the potential head injury that could have resulted from his stupid antics. 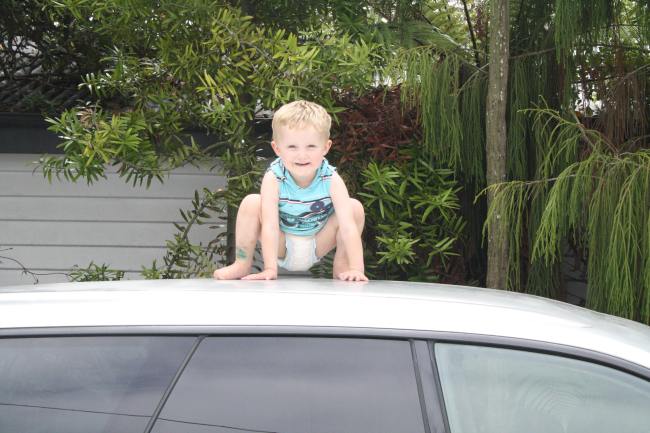 I guess my point is, and I think a few friends and fellow bloggers would say the same, I don’t just want to read about how wonderful your life is and how amazing you and everyone you know are, I want to read about your messy bits too, I want you to share that you don’t always get it right, I want to know I’m not the only one frustrated and exhausted by how much my day did not go as I would have liked.  Because empathy is also a powerful thing.