The Sachertorte was another technical challenge on Series Two of GBBO and trying this out timed well with me needing to bake a cake for a friend who was moving into his new home, on his birthday.  I thought this would be homely but special.

It needed to be gluten free so I exchanged the normal flour for a gluten free version.  As it’s a dense cake using almond meal already I didn’t think it would make any difference.  I’m pretty sure it didn’t.  I think the main thing I was hoping for was a smooth, flat top on the cake as in the actual technical challenge all the bakers got a ridge round the outside because the cake sunk in the middle and it meant when the ganache went on it looked lumpy.

There were some little air bubbles and a few cracks but all in all a nice finish I thought.

Now for the ganache.  Heat up cream and when you can see steam, take it off the heat and stir in the chocolate until it melts.  Easy no?  I thought mine went well and there was a definite shine.  Only trouble was I had to sign off for the night at that point, so it looked shiny when I left to go to bed.  Next day, it had gone from gloss to matt finish. 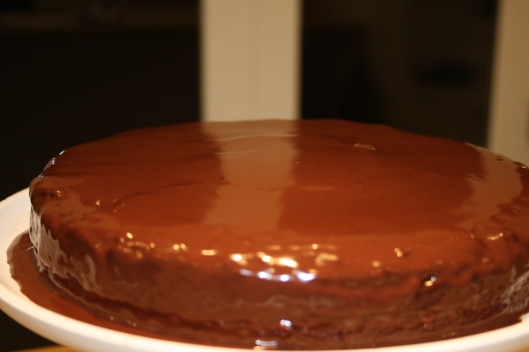 For the decoration I decided to stick with Sacher but the melted chocolate was hot and runny so after making somewhat of a hash of the writing, I ended up dribbling a little on the edge.  This led to me going a little rogue and just dribbling all over.  Have to say I think an evening class or two in piping would probably be of great benefit!

And now for the taste.  I took it to the moving in/birthday gathering and it was tried by many.  One piece of feedback was that they liked it because it was chocolatey but not too sweet.  I think that’s good praise for a Sachertorte.  I liked it, would definitely do it again.  Here’s what it looked like.

I’m thinking maybe even a seven out of 10?  Points lost mostly on piping which looked much like one of Jackson’s drawings.