Today was Anzac Day, which I believe is the Australia/New Zealand equivalent to Remberance Sunday in the UK.  The lovely thing about it over here is that they give a Bank Holiday for it and this year it was a Thursday, so a little reprieve towards the end of the week – sweet.

Yesterday, Minnie and I baked Anzac biscuits to mark the day and today we brought them to the beach for our Anzac Day family outing.  Jackson is modelling his Anzac biscuit here.

After spoiling the children (and let’s face it us too because we get to stay horizontal for another hour) with a special iPad showing of The Lion King in mummy and daddy’s bed, we set off for Taylor’s Mistake.  This is a particularly attractive bay round the corner from Sumner where surfers and paragliders like to hang out.  We chose the less adventurous pursuit of sitting on a bench watching the waves whilst our children ran around us.  Which was all very nice until the little monkeys decided to make a run for the car park!

We should have probably seen how our morning was going to go from this first act of rebellion, but with a confidence that only blind naivety can provide we set off for Sumner town to get a much longed for coffee.

Now going for coffee with two or more toddlers, can go one of two ways – ten times better than you had ever dreamed of or a thousand times worse than your most negative expectations, but one thing is for sure, it never goes how you planned it to.

My plan was we would get a nice seat outside where we could watch the end of the brass band procession, the children would be thrilled with their chocolate milkshakes and brownie that we had forked out for and we the ever-loving parents would get to sip our hot coffees as our children played around us.

What in fact happened is that the chocolate milkshakes were either dropped or forgotten, the children didn’t sit down for two consecutive seconds, instead terrorised unsuspecting dogs (who I might add were displaying the behaviour and manners I was hoping from my children!), screamed and squealed so that all other punters had glared at both Gareth and I several times in the 20 minutes we were there, shamed us with the ‘the one second you are not holding onto the neck of my T-shirt I am making for a run for the nearest moving car so an old lady has to save me from near death, rewarding us with disapproving glare number 53’ trick and then to top it off with Gareth hanging out on the curb outside the cafe whilst the children run in opposite directions and I try frantically to swallow my cake and gather together our seven bags so I can chase one of our children down the street, I find a hair in the brownie – blurrrghghgh.  Relaxing coffee en famille, it was not.

Thankfully the weather and our second beach (the one at the top of this blog in fact!) of the day did not disappoint.  It took a while for the children to see the sea, one busied himself with a rather disgusting puddle under the outside shower.

And the other went climbing on rocks with her daddy. 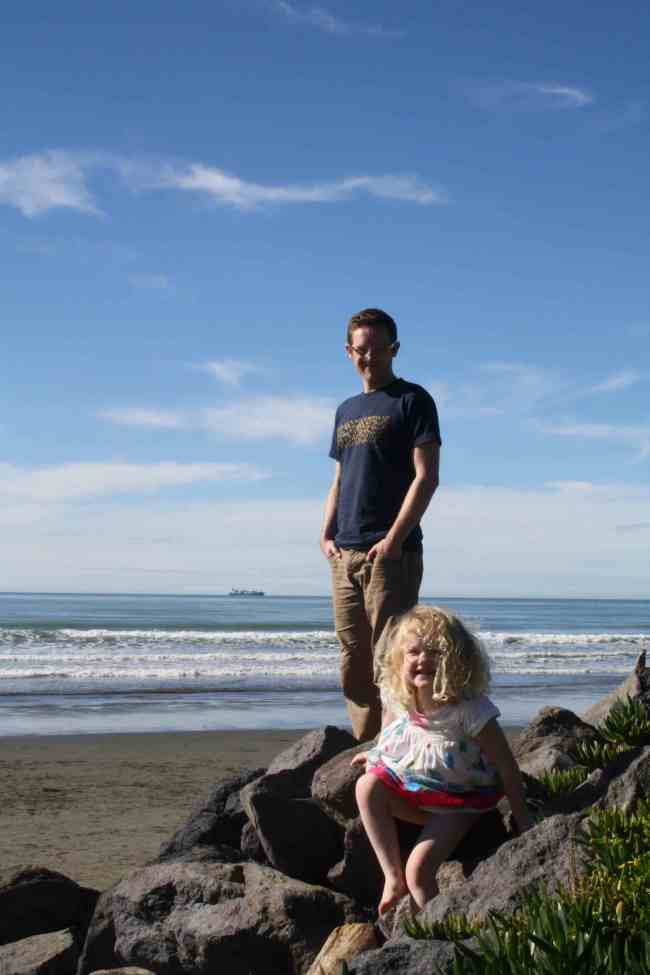 But eventually we made it to the water and clothes were off (not mine, you can read on!)

As all parents know, revenge is sweet and mine came in the form of a rather freezing cold shower to get rid of the sand (hate the stuff!).  Sadly, they seemed to find it lots of fun.

And of course the toddlers come out on top in the end.  Mummy had come entirely unprepared so it was damp shoulder carries all the way back to the car.

Once all the drama is over, I was rather pleased that the children had such a fun-filled morning but I do look forward to the days when what is fun for the children is even just a little bit towards being fun for us!!